This image was found at the McCord Museum in Montreal, Quebec, Canada.  It can be used as a conversation starter in class given that it portrays Marguerite de Roberval as a strong woman, but also has her declaring, “J’ai besoin d’un homme”.  The image can definitely spark a lively discussion.

This image was found at the Bibliothèque Nationale de Québec.  Students can discuss the commonalities between this visual representation and the various narratives.

A link to the woodcut of Marguerite de Roberval marooned on the island as depicted in Thevet’s Cosmographie Universelle:

These are photos from the Alumnae Theatre of Toronto’s production of Shirley Barrie’s play, I am Marguerite (Photos by Bruce Peters): 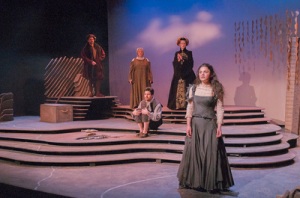 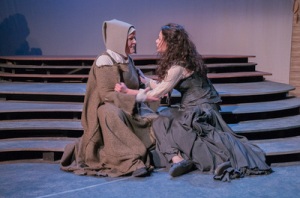 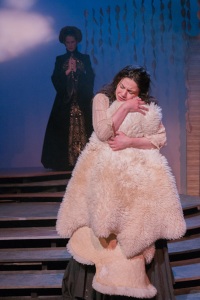 A cartoon by the costume designer of the production, Peter DeFreitas: